Merrill Charles began his time with the ACEing Autism tennis program rolling a ball across the court. Just six weeks later, he was using a racket to tap the ball back and forth over the net with his teammates.

ACEing Autism uses tennis to develop social skills for children with disabilities spanning across the autism spectrum. The program works with more than 500 children nationwide and has 30 locations, including Drumlins Tennis Club in Syracuse.

Carol Charles’ 12-year-old son, Merrill, was one of the first participants in the Syracuse program. As the parent of a child with autism, she tries to involve him in many programs, which is how she first discovered the ACEing Autism sessions. They were listed in a monthly online newsletter from the Central New York Autism Society of America.

After a successful six-week session spanning the first couple months of this year, the Syracuse ACEing Autism program has expanded to 18 participants, joined by 36 volunteers, for its second session beginning Saturday. 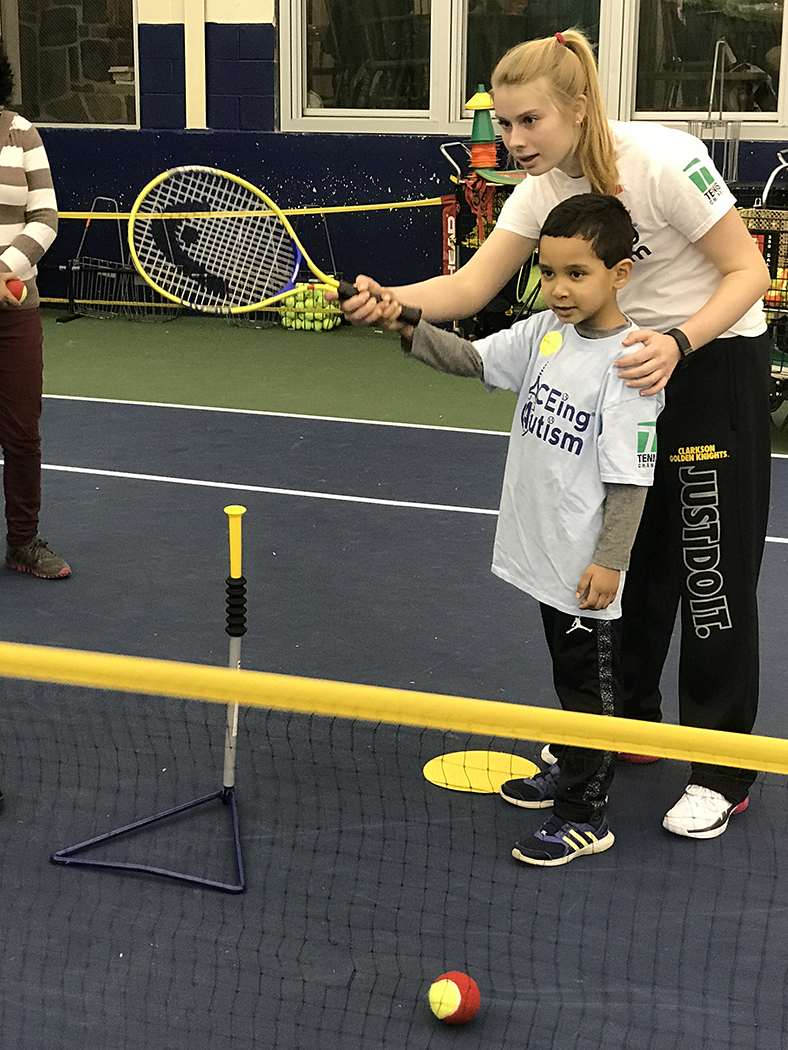 Before the Syracuse program, mother Paige Mills would spend more than an hour driving to Ithaca every Saturday to bring her son to ACEing Autism sessions. After a suggestion from Ithaca’s program coordinator, she approached Yaro Nieves, an Assistant Teaching Professional at Drumlins, with the idea of starting an ACEing Autism program in Syracuse. Without hesitation, Nieves was on board.

Two years later, they began the first session in Syracuse. Twelve participants were each paired with two volunteer “teammates,” who worked with participants of varying disability levels.

“My son is very high functioning. There are kids who are very low functioning. It meets them where they are at,” Mills said. “It can be a program where they can achieve success and have peer interaction.”

The program works with children based on their individual skill sets, which Nieves notes as a unique quality of tennis. Unlike traditional team sports, Nieves said, “It’s not a one-size-fits-all type of deal.”

Some children who begin the program are unable to hold a racket by themselves or throw a ball, but by the end of the six weeks they gain those skills. Other children start at the level where they could help the ball off a tee, and eventually progress to successfully hitting a ball back and forth over the net. High-fiving is one of the main ways the instructors help the children get to that point.

Mills said that in many programs for children with disabilities, parents direct their children. But in ACEing Autism, the volunteers are trained to help the participants be successful through varying levels of drills. 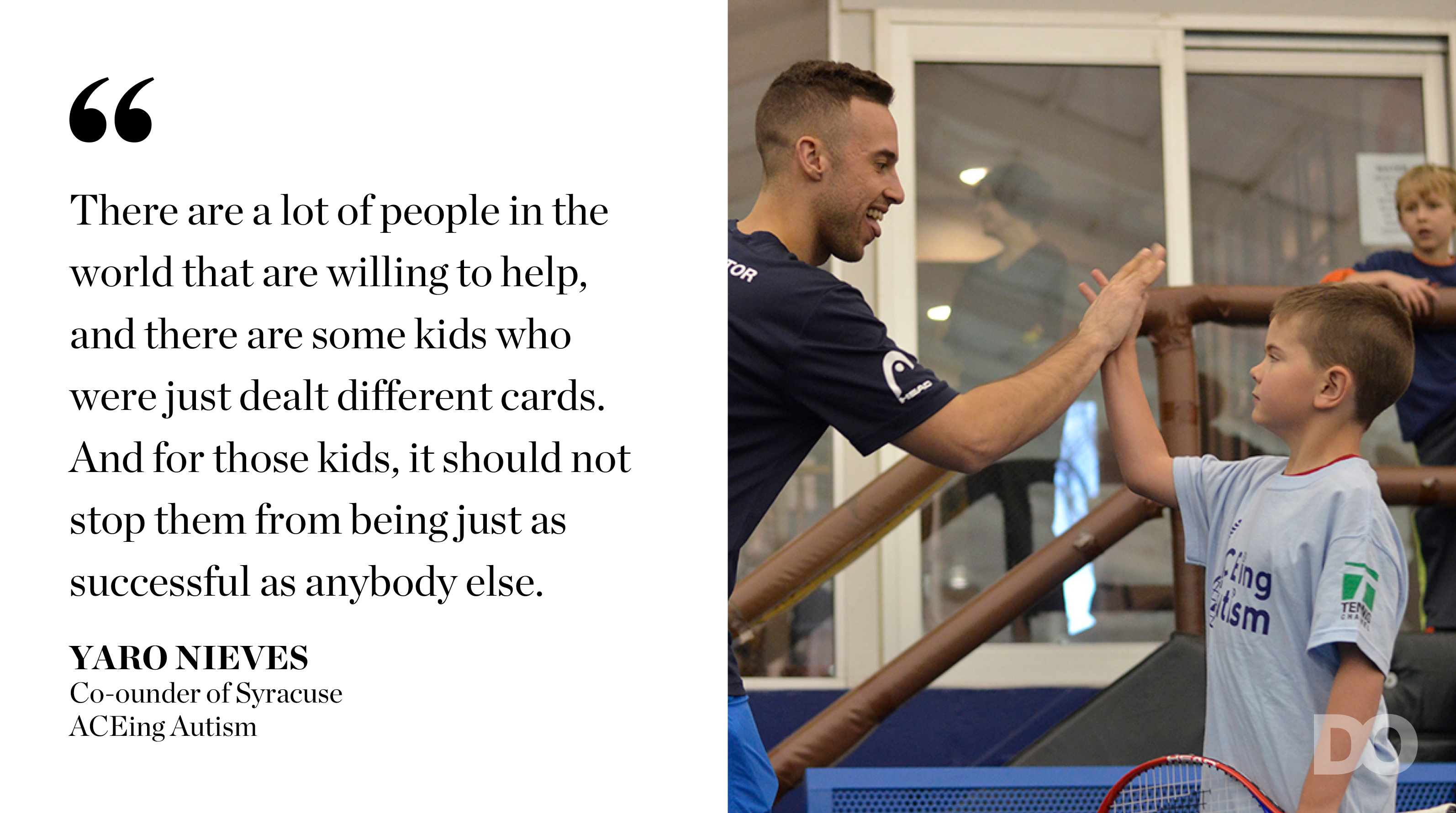 Charles said this allows the parents to proudly watch their children learn a new skill and grow while engaging with new people.

“It was one of the first times that I had taken him to an activity and I could sit and watch him interact and be engaged, and he was engaged from beginning to end,” Charles said. “He was doing everything they asked him to do, and I didn’t have to run and redirect him. It was very positive, and every week he asked to go back.”

Learning a new skill was Merrill’s favorite thing about participating, his mother said. The improvement he made as the sessions went on was considerable.

“He was proud that he was able to do the things that they were asking him to do, and he was having fun with it,” Charles said. “Going there, developing a new relationship, being among a community of people and learning something new. Now he can say, ‘I play tennis.’”

Since many volunteers are Nieves’ junior students at the tennis club, they are around the same age as the participants. Mills and Nieves believe this age similarity is an advantage to their program because it builds lasting relationships even outside of tennis, making the sessions more impactful for everyone.

“(The volunteers) are kids too, so the fact that they are able to do this with a small amount of training and just a ton of enthusiasm and positive attitude is pretty amazing,” Mills said. “It really makes me feel hopeful in terms of how we look at disabilities and being an inclusive community.”

The Drumlins community seems to recognize the work done by everyone involved with the program. Nieves receives phone calls from many club members who tell him how proud they are to belong to a club that offers a program for children with autism. Some members watched the program one Saturday morning and volunteered the next week. Others have given donations to the program, which allowed it to have a pizza party on the final week to celebrate the children’s growth and success.

“There are a lot of people in the world that are willing to help, and there are some kids who were just dealt different cards,” Nieves said. “And for those kids, it should not stop them from being just as successful as anybody else.”