One may not think the sport of tennis and the neurodevelopmental disorder autism go together, but as it turns out, that could not be further from the truth.

In September of 2008, Spurling and his wife, Shafali Jeste, created a program called ACEing Autism, a USTA New England community tennis association. A year and a half later, that same program is still running strong.

“My wife — a pediatric neurologist who focuses her research on autism — and I started the program because we wanted to do something together,” said Spurling. “We also both love tennis, as I have been teaching the game for the past decade.” 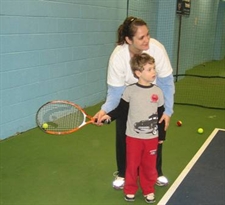 Jeste has been diagnosing autism at Children’s Hospital, and over the years has learned parents often travel to numerous places to find suitable programs for their kids.

“My wife told me children on the autism spectrum thrive in play-based programs,” said Spurling. “We thought tennis would provide a great fit for these kids. It would work on so many things, including hand-eye coordination, fitness, social skills, motor skills and their confidence.”

The program itself, which teaches the basic skills of tennis to children with autism, began at the Longfellow Club in Wayland. Back then, 15 kids participated.

But before the blink of an eye, that number grew to 30.

A year ago, Spurling and Jeste decided it was time to expand, so they added another location — the Weymouth Club.

Today, ACEing Autism is held on Saturdays at both sites, offering two 45-minute sessions at each club.

Spurling says the format for each session is pretty much the same each week. The group begins with five minutes of aerobic exercises, followed by two laps around the courts. After that, common exercises from the baseline to the net are performed, including sidestepping, jumping, skipping and lunges.

After that, the group moves on to volleys and ground strokes.

“With this population you have to make it fun and keep it creative,” said Spurling. “Keeping their focus is the biggest challenge. Yes, it is basic skills, but most of the children are between the ages of four and eight, so it’s their first time on a tennis court.”

Each session concludes with games.

“A big component to our program is to try and get the kids to interact and work on their social skills, such as waiting for their turn, picking up balls and giving each other high-fives,” he said.

“In addition to the program revenue we have several grants that support us, including the USTA New England section, the Youth Tennis Foundation and the Wellesley Hills Junior Women’s Club,” said Spurling. “The Flatley Foundation has also made a generous donation.”

Spurling also says the program would not be possible without the help of weekly, loyal volunteers.

“The Brandeis tennis teams have been helping every week,” he said. “The Boston College men’s tennis team and Wellesley College have both helped out, as have high school student volunteers.”

ACEing Autism has been a success, and Spurling and his wife expect the program to be around for quite some time.

“I hope this runs for years,” he said. “I think we started something special and worthwhile and I will do my best to see that it grows.”

Spurling went on to say he has seen tremendous progress and that, eventually, he would like to see this program in all tennis clubs.